74% of Americans Surveyed Think Weather is Growing More Severe; Less than Half are Prepared for an Emergency

ATLANTA, May 6, 2019 /PRNewswire/ -- Nearly three out of four Americans surveyed think the weather is growing increasingly severe, yet two in five are ill prepared for a severe storm, according to an exclusive study fielded by The Weather Company, an IBM Business (NYSE: IBM), in partnership with Morning Consult. During National Hurricane Preparedness Week (May 5-11), The Weather Company released its 2019 hurricane forecast for the Atlantic and Tropics, in addition to data on preparedness and the correlation between severe weather and emotions.

The Weather Company predicts 14 named storms, with the potential for seven hurricanes and three major hurricanes in 2019 -- a slight decrease in activity when compared to the previous season. The Atlantic hurricane season starts June 1 and runs through November 30.

"El Niño conditions are expected to continue throughout the North Atlantic hurricane season, which will enable an atmospheric pattern that is not conducive for increased tropical development," said Dr. Todd Crawford, chief meteorologist for The Weather Company. "Alternatively, the North Atlantic Ocean temperatures are warmer-than-normal, which tends to produce above normal activity levels. The combination of El Niño conditions and warm Atlantic waters suggest a near-normal season that is similar to last year. Much like the 2017 weather pattern that produced Hurricane Florence and Hurricane Michael, there is still the potential for intense tropical cyclones in 2019. Our teams are focused on providing the data and insights people need to prepare."

Nearly 40 percent of Americans have experienced severe weather that damaged their homes or made them evacuate, with one in five happening in the last five years. While weather is universal, how people react to it can be very personal. According to the study:

Less than half of Americans are prepared for an emergency.

Americans turn to their devices when storms are looming.

IBM and The Weather Company provide data and insights to help people and businesses prepare for the impact of weather. By leveraging billions of data sources, AI, and open source technology, the company is providing new possibilities of decision making, preparedness and response.

For example, through IBM's Code and Response deployment initiative, self-taught Brooklyn developer Bryan Knouse and his Project Owl team recently piloted innovative new technology built on the IBM Cloud and leveraging IoT, AI, and data from The Weather Company aimed at providing always-on communication networks in the path of severe storms. The technology was created during the Call for Code 2018 Global Challenge in response to Hurricane Maria, which devastated the island and knocked out communication services, leaving people with no way to contact family members or call for help.

Over 6,000 data points were successfully plotted on Project Owl's open source IBM Cloud-based incident management system, showing the potential of this technology to operate at scales large enough to help make a difference in disaster response. Along with the Project Owl team, IBM developers, Corporate Service Corps, and partners like the Information Technology Disaster Resource Center and the Engine-4 IoT Lab, are working to fully implement the OWL network in Puerto Rico later this year. Project Owl will conduct its next pilot in Houston at the end of May.

In 2018, over 100,000 developers from 156 nations participated in the inaugural Call for Code Global Challenge, a multi-year global campaign that rallies developers to use the latest technologies to drive long-lasting change across the world. Developers built more than 2,500 applications to address the impact of natural disasters through technology. To support the initiative, IBM engaged developers to work with weather data by offering tools like APIs and code patterns along with Watson AI, IoT and IBM Blockchain to help create solutions to mitigate the effects of natural disasters.

The IBM Code and Response initiative puts open source technologies to use for social good, while helping communities vulnerable to severe weather across the globe.

The study was fielded by The Weather Company, an IBM Business, in partnership with Morning Consult  from April 28, 2019 - April 29, 2019 among a national sample of 2,200 U.S. adults. The interviews were conducted online, and the data were weighted to approximate a target sample of adults based on age, race/ethnicity, gender, educational attainment, and region. Results from the full survey have a margin of error of plus or minus 2 percentage points. For additional information, visit weather.com.

The Weather Company, an IBM Business, helps people make informed decisions and take action in the face of weather. The company offers the most accurate forecasts globally with personalized and actionable weather data and insights to millions of consumers, marketers and businesses through its business solutions division and its own digital products from The Weather Channel (weather.com) and Weather Underground (wunderground.com). The Weather Company's digital properties serve 300 million monthly users in 62 languages and 178 countries, all on the IBM Cloud. For more about IBM's Weather business, visit newsroom.ibm.com/the-weather-company. For more about IBM's developer offerings, visit developer.ibm.com.

A global AI and Cloud company, IBM is one of the largest technology and innovation employers in the world and serves clients in 170 countries. For more information, visit ibm.com. 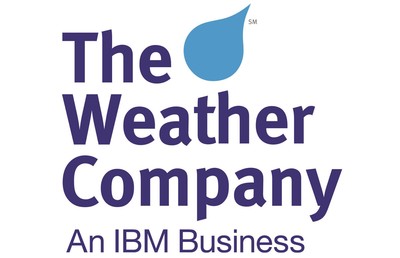