IBM Z Door Is a Model of Sustainable Design

Take, for example, the front door of the IBM z15, the latest version of the IBM Z mainframe. At first glance, it appears solid. But it actually hides a multi-layered system of aluminum and acoustic foam shapes, designed to do something crucial for a computer in a modern data center: increase airflow to cool the machine, while also reducing noise. These twin goals are harder to achieve than you might think. Keeping a computer from getting too hot usually involves perforating the doors to maximize the movement of air across the system components. But that design doesn’t suppress the whirring sound of the fans inside the system. In a data center filled with rows of servers, minimizing machine noise is a major priority.

It was a challenge that called for some serious Design Thinking—that is, a relentless focus on outcomes, rapid prototyping and collaboration across multidisciplinary teams. Design Thinking has become a vogue concept in the tech world in recent years. But only sometimes—as with the IBM Z door—does form fully align with function to meet the Design Thinking ideal.

The new door was prompted by the latest significant change in the overall dimensions of the mainframe. When IBM introduced mainframes in 1964, they were room-sized machines. These workhorse computers have evolved in many ways since then, including by steadily shrinking in size.

In 2016, IBM decided the next version of IBM Z would be physically smaller than previous versions, enabling it to fit into the standardized 19-inch racks used in modern cloud data centers. This would enable companies to reduce and optimize data center floor space. But packing the components into a smaller footprint—600 mm wide by 1,200 mm deep (23.6 inches by 47.2 inches)—would require IBM to devise creative new cooling and acoustic systems. Including a new door. 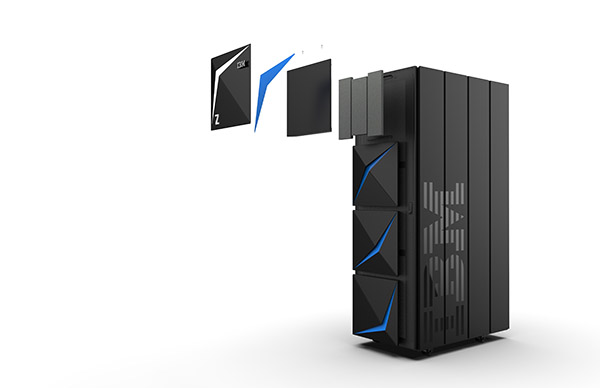 An exploded view of a panel on the z15 door

Getting started, the cross-functional group laid out the challenges they would need to solve in computational fluid dynamics, acoustical modeling and design. Their work had to be collaborative, given the interdependent design goals. A thermally robust door might not meet acoustical requirements. A door with too much sound damping might cause overheating. And not every combination that might achieve both goals would meet IBM’s industrial design and branding objectives.

“We quickly saw the importance of radical collaboration in solving tough problems,” said Sassano. “Design and engineering established a productive dialogue—and ongoing negotiation. It was a remarkable working relationship.”

As they worked, the team reached a realization: Embedding the door with guided paths, or “channels,” would solve both the acoustical and thermal challenges. Their reasoning was pure simplicity. Air could flow efficiently through the inlets, cooling the machine. But because sound waves don’t flow—they travel in a straight line—they would be absorbed by the interior walls of the airflow channels. And importantly, because the channels would be buried inside the structure of the door, they would not hinder the door’s external design and appearance. Only the elegantly contoured inlets would be visible. The door panel allows air to flow in around the edges, while sound waves—
which travel in a straight line—are muffled by the panel and the foam behind it

The team quickly created a full-sized mock-up, which they evaluated in thermal and acoustical test chambers to prove their theory. Several more mock-ups followed, enhancing and improving the door with each iteration. They applied for—and received—a patent on the groundbreaking solution.

The team also spent a good deal of time on the external features of the door. They eventually settled on a concept that referenced design elements of the traditional large-framed IBM Z, such as angled surfaces and color accents. They evolved these elements into a new grid-based visual layout, with four distinctive floating panels that drove home the new modular architecture. 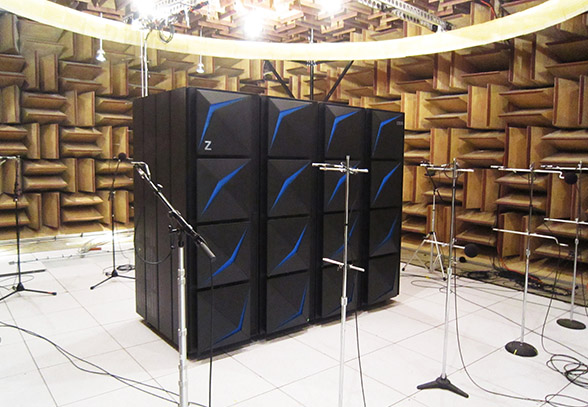 An initial version of the door was completed in just one year and debuted on the IBM z14 ZR1 in 2018—demonstrating that Design Thinking can mean fast innovation. The door was so well received that an updated version is now featured throughout the IBM z15 product line. The door is an important factor in the superior energy efficiency of the z15, which also introduced intelligent power distribution unit technology that saves power by enabling more input/output capacity without needing extra frames. In fact, a single-frame z15 (or its LinuxONE III variant) saves an estimated 50 percent in power consumption per year, compared with x86 systems running workloads with the same throughput. In addition, the door reduces noise by four to seven decibels, depending on the application. Most other rack-mounted servers used in data centers don't have doors and are therefore louder than the z15.

“Sustainable design is integral to Z,” said Demetriou. “It has always been the premier platform for consolidating workloads. It is a great feeling to help continue this vital tradition.”

Change is nothing new for IBM’s mainframe. Over the past 56 years, IBM has continually reinvented it for the future, enhancing its performance, reliability and security. Today, IBM mainframes are still the computing systems that run the world’s banking, transportation, insurance and other enterprises.

Thomas Watson Jr., IBM’s second chief executive and the son of IBM’s founder, once said: “Good design is good business.” As the door to the latest IBM Z proves, good design can also help point the way to a more sustainable future.