By Trish Hall and Katia Moskvitch

For many scientists, the COVID-19 pandemic is a once-in-a-lifetime moment. The world is looking to them for solutions as they collaboratively work against the same enemy: the deadly disease caused by the coronavirus. And a growing number of those science teams are making use of supercomputers to speed their work.

Researchers worldwide have free access to the COVID-19 High Performance Computing Consortium that has just completed its second month of operation. Since IBM Director of Research Dario Gil and the federal government launched it in mid-March, the consortium has provided 58 separate scientific research efforts with access to supercomputing resources, with additional projects in the offing. The effort has brought together companies that are typically rivals, like Microsoft, Google, Amazon, and Hewlett Packard, as well as the U.S national laboratories, NASA, the National Science Foundation and many of the leading research universities.

The two newest members are UK Research and Innovation (UKRI) and the Swiss National Supercomputing Centre (CSCS). UKRI is a British group that works with universities, research organizations, businesses, charities and government to foster research and innovation. UKRI is making available several of its supercomputers, including ARCHER, a 2.55 Petaflop machine based at the University of Edinburgh.

The CSCS is providing Piz Daint, the sixth-ranked supercomputer in the world, with 27.15 Petaflops of peak performance. 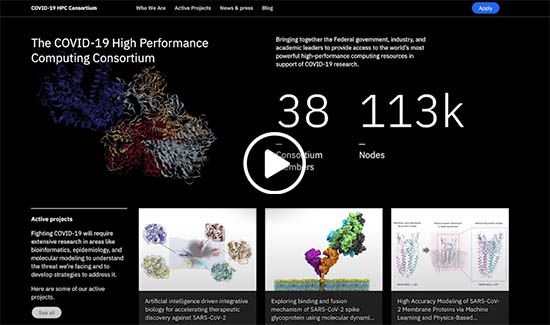 The scientists benefiting from the COVID-19 High Performance Computing Consortium are working together across institutions and geographies. Because of that global cooperation, projects that might have taken years are speeding along and seeing results in months. Sometimes even in just days.

More than two-dozen U.S.-based supercomputers are part of the network, including Summit at the Oak Ridge National Laboratory in Tennessee that is the world’s fastest supercomputer.

“People from all over the world are contacting us and saying, "Can we join in?’’ says Jeremy Smith, Director of the Center for Molecular Biophysics at the Oak Ridge laboratory. “We have computer scientists who say, ‘Well look, I'm good at optimizing codes to make it run fast. Could we help?’ We have chemists that joined us, pharmacists, virologists that are part of the team and physicists.”

Scientists submitting proposals are focusing on three classes of problems related to SARS-CoV-2, the virus that causes the COVID-19 disease:

●    Analyzing its protein structure through molecular simulations
●    Using machine learning to identify binding sites on the virus or possible molecular candidates that could lead to the discovery of a drug that would treat the disease
●    Trying to define risk groups and predict how the virus will spread, to help health systems cope

Supercomputers have thousands or evens tens of thousands of processors that work together to perform large calculations. They’re particularly well-suited for processing and analyzing large amounts of data using artificial-intelligence algorithms. These applications require more cloud-based resources as well as a large memory capacity.

The consortium’s computing power—nearly 500 petaflops in all—is so enormous it is hard to picture. But to give one glimpse: Frontera, the most powerful academic supercomputer, located at the University of Texas, has a system that equals the computing power of 100,000 desktop computers.

All of the scientists are driven by a need to help, but some are also aware that their work might help save friends and family members.
Stratos Davlos, chief technology officer at Innoplexus, a company headquartered in Germany, says the manual work of drug development can typically take two to three years. But AI accelerates the process and could lead to an effective drug in about three months, after which animal and clinical trials could begin.

Davlos is driven to produce new drugs partly by the desire to help his family, which has been hit three times by cancer. In addition, he says, his wife has a compromised immune system, putting her at higher risk if she contracts the coronavirus. So they take extra precautions—including wiping down their dogs, wiping down every package that comes through the door, and keeping their distance from neighbors and mail carriers.

Innoplexus is using AI to design new molecules that could lead to a treatment.  The consortium, he said, has been critical for supercomputer access because the company lost access to hardware it was using in India.

Here’s how some other scientists are benefiting from the consortium:

●    Researchers Thomas Cheatham and Rodrigo Galindo from the University of Utah, using the IBM POWER-based Longhorn supercomputer, generated more than 2,000 molecular models of compounds relevant for COVID-19. They then ranked the models based on the individual molecules' force field energy estimates. The researchers believe this is important information in selecting inhibitors that could help form a treatment or cure for COVID-19.
●    An Indian company called Novel Techsciences will work to identify phytochemicals from Indian medicinal plants that can act as natural drugs against the protein targets in SARS-CoV-2. The ultimate goal is to develop a prophylactic treatment regime to control the pandemic.
●    Researchers at Utah State University are trying to better understand person-to-person transmission of airborne respiratory infectious disease. This will involve complex simulations to determine how virus-laden droplet clouds move within an idealized hospital setting and where particles settle. The ultimate goal is to develop non-pharmacological methods to reduce virus spread.
●    NASA bioscientists Viktor Stolc and David Loftus are trying to predict the spread of the virus by defining risk groups. Risk models based on their results could help identify patients best suited for clinical trials of vaccines and antivirals.
●    A University of Michigan team is using a supercomputer with AI capabilities to  see if any one of more than 1,600 existing FDA approved drugs can tackle COVID-19. They’re also screening more than 5,000 experimental drugs.
●    The British chemistry startup PostEra is using a supercomputer to search for antiviral drug candidates. PostEra received more than 2000 submissions worldwide for testing. In two months, it has identified more than 60 experimentally confirmed fragments that effectively target a key protein associated with COVID-19.

Smith, at the Oak Ridge National Laboratory, says he is sure the global collaboration will quickly lead to treatments.

“Everybody has a slightly different way of looking at this,’’ Smith said. “And hopefully together in this worldwide ethic, which we are only a small part, one will be able to come up with something useful, quicker, rather than in say a year's time.”

With this new consortium as a model, IBM’s Dario Gil would like to see a new international organization—a Science Readiness Reserve—that unites government, academia and industry to help the world be better prepared for the next global emergency. That might be another virus or a devastating drought.  This organization would plan for unexpected events and be ready to act on global threats.

For scientists, such an organization would be a dream. For now, they are grateful that their work to combat COVID-19 is being noticed and appreciated—and being giving the supercomputing power to improve their odds for success.