BERLIN, Sept. 10, 2019 /PRNewswire/ -- IBM (NYSE: IBM) and one of Europe's leading organization for applied research, Fraunhofer-Gesellschaft announced an agreement to partner in the area of quantum computing with the goal of advancing the research and experimentation in Germany. The cooperation aims to drive the creation of a new community for industry and application-oriented quantum computation strategies. 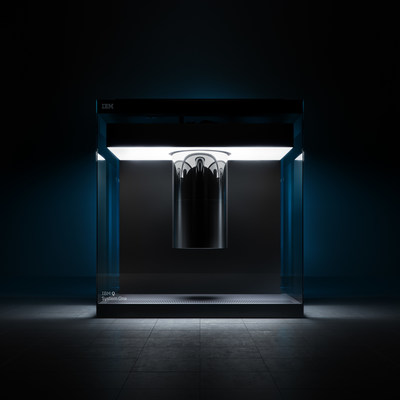 Under terms of the agreement, an IBM Q System One, owned and operated by IBM, will be located in an IBM facility in Germany. It will be the first installation of its kind in Europe.

Developed by IBM Research, the IBM Q System One is optimized for the quality, stability, reliability, and reproducibility of multi-qubit operations. Due to these factors and the resulting high Quantum Volume - a measure of the power of a quantum computer - IBM Q System One enables state-of-the-art quantum computational research for science and industry.

Quantum Computing has the promise to untangle the complexity of molecular and chemical interactions, address complex optimization problems, and make artificial intelligence much more powerful. Such advances could open the door to new scientific discoveries, life-saving drugs, and improvements in supply chains, logistics and the modelling of financial data.

The German Government will invest 650 Million Euros over the next two years to support the transition of quantum technologies from basic research into market ready applications. Now, the IBM Q Network, will have a major, new European hub for quantum computing. The hub will focus on developing a unique concentration of quantum skills in Germany and build a community of academics, researchers, developers, IT professionals and industry experts around the technology.

Anja Karliczek, German Federal Minister of Education and Research, said, “Quantum technology is set to have a major impact on Germany’s future, in both the scientific and economic sphere. Last year, the Federal Government therefore launched the program ‘Quantum technology: from basic principles to market applications’, which provides a clearly defined framework for action. Federal funds of 650 million euros will be invested in research and the development of quantum technology over the period until 2022. Fraunhofer-Gesellschaft’s collaboration with IBM in the field of quantum computing can make an important contribution to the realization of this program. It is vital that we now begin developing various fields of application for quantum computing, not least for small and medium-sized companies, which play a significant role in the German economy.”

The joint initiative of Fraunhofer-Gesellschaft and IBM (Germany) aims to unite prominent partners in research and industry under the roof of a Fraunhofer Competence center for quantum computing, operated and managed by the Fraunhofer-Gesellschaft, already extensively active in the fields of quantum technology in fourteen of its institutes.

"This effort is poised to be a major catalyst for Europe's innovation landscape and research capabilities around quantum computing. This collaboration, as part of the IBM Q Network, will bring together European experts in a broad, active community of research partners to prepare the region for upcoming opportunities in the digital economy. Through this joint effort with Fraunhofer, we are ensuring the region is at the frontline of building the future", says Martin Jetter, Senior Vice President and Chairman IBM Europe.

"This partnership is a landmark quantum computing initiative and a crucial step forward for German research institutions as well as businesses of all sizes in our country. The installation of an IBM Q System in Europe is unprecedented and opens up the development of quantum computational strategies at the Fraunhofer-Centre under full data sovereignty according to European law", says Professor Reimund Neugebauer, President of the Fraunhofer Gesellschaft.

The IBM Q Network is collectively forging the path to quantum advantage and discovering practical applications of the emerging technology. Participating organizations access IBM's most advanced quantum systems through the IBM Q Experience and have access to proprietary software and tools. Professionals across industry and academia need new skills to capitalize on quantum computing. As part of the IBM Q Network, organizations receive support, training, and enablement from IBM's industry-leading technical experts.

For more about IBM Q: https://www.ibm.com/quantum-computing/

The Fraunhofer-Gesellschaft is the leading organization for applied research in Europe. Its research activities are conducted by 72 institutes and research units at locations throughout Germany. The Fraunhofer-Gesellschaft employs a staff of more than 26,600, who work with an annual research budget totaling 2.6 billion euros. Of this sum, 2.2 billion euros is generated through contract research. Around 70 percent of the Fraunhofer-Gesellschaft's contract research revenue is derived from contracts with industry and from publicly financed research projects. International collaborations with excellent research partners and innovative companies around the world ensure direct access to regions of the greatest importance to present and future scientific progress and economic development.