The winning solution, Prometeo, will be deployed through a companion IBM program that is dedicated to tackling some of society's most pressing challenges with IBM open source-powered technologies

NEW YORK, Oct. 14, 2019 /PRNewswire/ -- The winner of the Call for Code 2019 Global Challenge has been announced: a system that uses artificial intelligence and the internet of things to guard the safety of firefighters as they battle blazes. 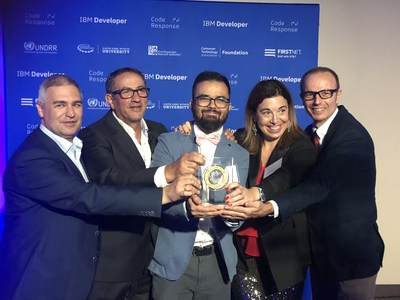 The winning project, Prometeo, submitted by a team from Barcelona, was announced by the competition's Founding Partner, IBM (NYSE: IBM), and Creator, David Clark Cause, during a celebration at the United Nations Delegates Dining Room in New York City on October 12th.

The Prometeo team, which includes a nurse, a firefighter, and software developers, was awarded the Call for Code grand prize of USD $200,000. Together they created a combination hardware-software solution based on multiple IBM Cloud services. The health device—which is about the size of a smartphone and straps to a firefighter's arm—has multiple sensors that measure key variables including temperature, humidity, and smoke concentration. This information is collected and transmitted to IBM's Cloud IoT platform. A Node-RED workflow then sends the data to the IBM Watson-based machine learning model, which distills the information into a simple color-coded status for fire command centers to monitor the health of each deployed firefighter in real-time.

Through IBM's $25 million Code and Response initiative that fosters the creation and deployment of open source technologies to help solve some of society's most pressing challenges, the team will receive deployment support from IBM, The Linux Foundation, and other partners interested in scaling their solution. As part of the program, Prometeo will also be further developed and deployed via the IBM Corporate Service Corps in communities in greatest need.

For more information, including video and photos from the event, visit IBM Newsroom.