BOLOGNA, Italy and ARMONK, N.Y., July 7, 2020 /PRNewswire/ -- IBM [NYSE: IBM] and CINECA, Italy's national high-performance computing consortium, made up of the Ministry of Universities and Research (MIUR), 69 Italian universities and 11 national public Institutions, consolidated their long-standing collaboration with the new Marconi100 supercomputer, the 9th most powerful supercomputer in the world, and the 2nd most powerful in Europe, according to the most recent iteration of the Top500 ranking. 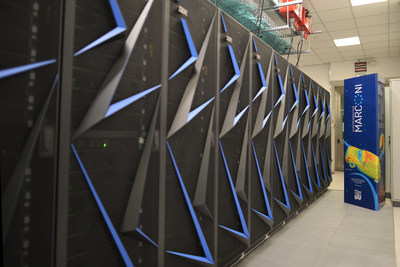 The new system was built by IBM using the same IBM POWER9 technology and NVIDIA V100 Tensor Core GPUs as the world's smartest AI supercomputer, the US Department of Energy's Summit system, and according to measurements conducted by CINECA, offers nearly 32 theoretical peak petaFLOPS of computing power, or up to 32 quadrillion calculations per second.

With Marconi100, CINECA reaffirms its mission as a leading supercomputing research center with a new Tier0 supercomputer, the highest-performing classification for European systems. Marconi100 will support European researchers, through the PRACE initiative, and Italian researchers through the Italian Supercomputing Resource Allocation initiative (ISCRA), equipping them with additional computing resources to face the socioeconomic challenges of our time such as climate change, renewable energy, sustainable economics, and precision medicine.

In addition, by drastically cutting the time to insights through digital simulation, supercomputing can accelerate knowledge and decision support and can be of great help in dealing with risk management situations, like measuring environmental impact, or crisis management situations such as earthquakes or other extreme events like the current pandemic.

In particular, one of the first projects for Marconi100 is research around COVID-19 therapies that are able to reduce the pathogenic aggressiveness of the virus. For example, it will digitally simulate the behavior of proteins that allow the virus to replicate to better identify molecules and pharmaceutical compounds able to inhibit it. CINECA is already a partner in many projects at both national and international levels and participates in the Exscalate4CoV project, funded by the European Commission under emergency procedure.

"The Marconi100 project is part of a long, fruitful collaboration with the Inter-university Consortium involving also our centers of excellence in Europe," said Enrico Cereda, GM, IBM Italy. "With the same technology as two of the top three supercomputers in the world, Marconi100 will follow in their footsteps and offer the community of researchers the computing power necessary to accelerate the discovery of a cure against COVID-19. As the activity of the Summit system shows, without the availability of these architectures it would take much longer, incompatible with the urgent need to find a solution. We are proud to be at CINECA's side, and the country's, in this and other important scientific challenges."

"With the installation of the Marconi100 accelerated cluster, the Marconi project is completed for the persistent evolution of the CINECA calculation system started in 2016 which, today, allows us to have an aggregate computing power of about 50 petaflops. The Marconi100 partition, with the experience gained by IBM with the US Department of Energy's Summit and Sierra projects, will allow us to provide the national and European scientific community access to a supercomputing system of great production stability and high quality of service," President of CINECA Eugenio Di Sciascio said.

"This confirms the centrality of the CINECA Consortium in the development of research in the academic and industrial field as it happens with Exscalate4CoV, a project led by the pharmaceutical company Dompé, engaged in research and evaluation of proteins for the fight against coronavirus," CINECA GM David Vannozzi said.

CINECA is partner of more than 20 international projects for the development of the European HPC infrastructure and its technological and application ecosystem, in the field of plasma physics with the Eurofusion project, whose aim is to determine a significant progress in fusion energy production; in matter and materials science with the MAX - Material Science at Exascale project; in industrial engineering with the Exellerat Engineering project; in solid earth physics with the Cheese Solid Earth project: projects that will benefit from the high processing capacity provided by Marconi100.

The design and integration of the Marconi100 accelerated cluster are the result of IBM's experience building the world's two smartest AI supercomputers: the US Dept of Energy's Summit and Sierra.

The use of an accelerated computing architecture is anticipated to improve productivity for many applications, affecting a significant performance increase at both at the individual server node level as well as an aggregated cluster connected through the high-performance InfiniBand network.

In terms of energy sustainability, the increased processing power will not lead to an increase in consumption. The new system will be able to count on greater energy efficiency for the same processing capacity by a factor equal to about three times CINECA's pre-existing system.