POUGHKEEPSIE, N.Y., Oct. 6, 2022 /PRNewswire/ -- Today U.S. President Joseph R. Biden, Jr. and IBM (NYSE: IBM) Chairman and CEO Arvind Krishna will tour IBM's Poughkeepsie, New York site to see firsthand where the future of computing is being innovated, designed and manufactured. During the visit, IBM will announce a plan to invest $20 billion across the Hudson Valley region over the next 10 years. The goal of the investments, which will be strengthened by close collaboration with New York State, is to expand the vibrant technology ecosystem in New York to unlock new discoveries and opportunities in semiconductors, computers, hybrid cloud, artificial intelligence and quantum computers. IBM has long called New York state home, and its business supports more than 7,500 jobs across the Hudson Valley. This region has been a hub of innovation and manufacturing for decades. From Westchester County to Poughkeepsie to Albany, IBMers are pushing the limits of computing and helping clients embrace digital transformation.

"IBM is deeply honored to host President Biden at our Poughkeepsie site today and we look forward to highlighting our commitments to the innovations that advance America's economy," Arvind Krishna, Chairman and CEO of IBM, said. "As we tackle large-scale technological challenges in climate, energy, transportation and more, we must continue to invest in innovation and discovery - because advanced technologies are key to solving these problems and driving economic prosperity, including better jobs, for millions of Americans."

President Biden's visit to the IBM Poughkeepsie site highlights the CHIPS and Science Act's unique opportunity to advance American innovation and manufacturing. The technology that IBM delivers today from Poughkeepsie will directly benefit from the CHIPS and Science Act that the President recently signed into law. It will ensure a reliable and secure supply of next-generation chips for today's computers and artificial intelligence platforms as well as fuel the future of quantum computing by accelerating research, expanding the quantum supply chain, and providing more opportunities for researchers to explore business and science applications of quantum systems.

IBM's Poughkeepsie site has helped the country embrace the transformative power of technology since 1941, from manufacturing armaments during World War II to developing and building the latest generation mainframe computers. In Poughkeepsie, IBM builds state-of-the-art mainframe computers that power the global economy. The site also is home to IBM's first Quantum Computation Center – where a large number of real quantum computers run in the cloud. IBM's vision is for Poughkeepsie to become a global hub of the company's quantum computing development, just as it is today for mainframes.

The future of semiconductor technologies also is being created in the Hudson Valley, from Yorktown Heights to Albany and beyond. In Albany, a unique public-private semiconductor ecosystem is where IBM last year announced the first 2 nanometer chip technology, one of the semiconductor industry's biggest breakthroughs of the last decade. The expansion of Albany's collaborative innovation model could be a foundation for the National Semiconductor Technology Center (NSTC) that will be implemented as part of the CHIPS and Science Act.

IBM's announcement today builds on and expands these investments in the future of American innovation, and will fuel economic growth and job opportunities for people of all backgrounds to work with cutting-edge systems and accelerate the pace of discovery across the Hudson Valley. 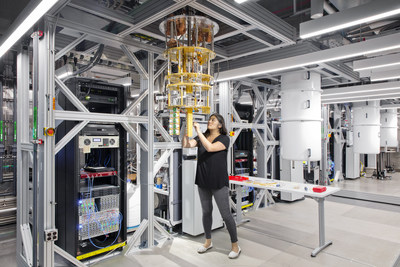